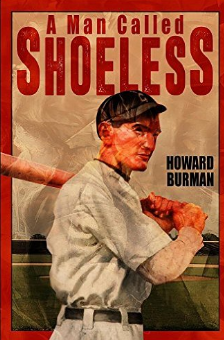 The story of one of the most fascinating baseball players ever.

Who is Howard Burman, this individual who can write in such a moving fashion? He’s the real deal. The holder of a Ph.D. in Dramatic Literature from Ohio State and a Fulbright Scholar, Burman has served as the artistic producing director of three theater companies and has written more than 20 full-length plays, so you know he has a better feel for dialog than just about anyone else who’s written baseball history. And that’s the other aspect of “A Man Called Shoeless” that shines from the pages… the dialog Burman has created to tell his story.

This extensive (600 pages) and moving story of a man called Shoeless makes it clear that Joe Jackson was not your average ballplayer, any more than Howard Burman is your average baseball author. Make no mistake, despite its obvious historical underpinnings and Burman's extensive research, this is not a history book. Burman has put his own words in the mouths of many of the book's characters to, in effect, fill in holes in the historical record. More a biography than anything else, it is a fine piece of creative writing, a book worth reading, for its insight into southern mill towns, the southern mentality, baseball in the Deadball Era, the 1919 World Series, and the undeniably hard life and times of Shoeless Joe Jackson.