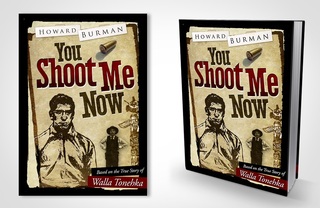 You Shoot Me Now

In 1897 in the Indian Territory (now the state of Oklahoma) the young Choctaw Indian in convicted of murder and is sentenced to be executed, but he is allowed to go free and play baseball for his team if he will promise to return after the final game to be shot. He agrees.

His story garners great national interest and is reported by newspapers across the country. Questions abound. Will he honor his promise and agree to be executed? Should he? If he does, is he a hero or a fool? At the last minute will he run off? Is the Choctaw sense of honor stronger than that of others? Is the greater sin preferring life to honor and for the sake of living to lose what makes life worth having?


WILLIAM R. DRAPER News was being fashioned into a crude, queer form and trigger action when I began covering the Indian Territory in the 1890s. As a cub reporter among the Indians of that frontier, I saw and wrote of many unusual people and events. Chieftains, outlaws, medicine men and train robbers. With my trusty camera I shot these men and talked with them in their hideouts and houses. Over many a lonely trail I rode horseback, or on my bicycle, seeking this frontier melodrama.

There was no shortage of colorful material about which to write—a never-ending procession of unusual persons to see and photograph. I hope the facts related in these stories, gathered on the spot and often under trying circumstances, provide a revealing glimpse of a country and a people.

Many of the tips for my articles came to me at the White Horse, a trading post deep in Indian Territory. At White Horse, while waiting for something to break, or for an assignment, I worked at the big general mercantile store owned and operated by the rich Indian chieftain, Strike Axe, and my father, Luther C. Draper.

During those years I compiled and sold hundreds of articles to the best newspapers and magazines in the United States and London. Perhaps the most fascinating of those was the incredible story of the orphaned Choctaw Indian, Walla Tonehka.

He was a typical Indian of his tribe—dark, with piercing black eyes, coarse hair, high cheekbones, and heavy Roman nose. He was maybe six feet tall, broad shouldered, and walked with a slight slouching stoop.

His dress was essentially modern, with no odor of the blanket about him. He could usually be found wearing a blue and white cotton shirt tucked into coarse trousers of loose fit. His shoes were rough and heavy.

Since his baseball team didn’t have real uniforms, this is also how he appeared when he was playing ball.

Tonehka had not a bad face for a Choctaw Indian. It was the face of a stoic rather than a criminal. A face with a certain grim sensuality to it.